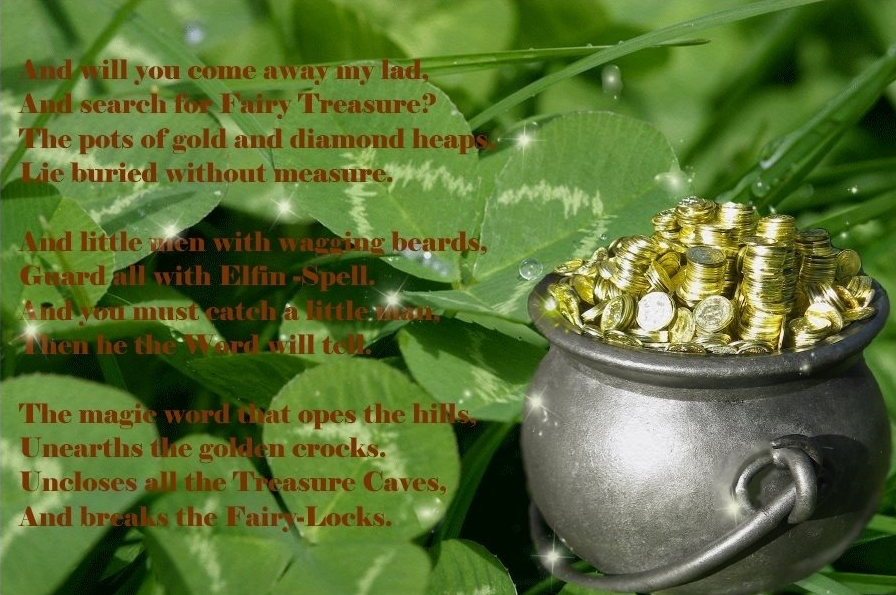 THE BOY WHO FOUND THE POTS OF GOLD

There was once a poor boy who used to drive his cart along the road, and sell turf to the neighbours. He was a strange boy, very silent, and spent his evenings in his little hut, where he lived alone, reading old bits of books he had picked up in his rambles. And as he read, he longed to be rich and live in a fine house with a garden all round him, and to have plenty of books. Now he once read how the Fairies’ Shoemakers, the Leprechauns- merry, tricksy little sprites-sit at sunset under the hedges mending the shoes of Elfin Folk. And how they chuckle as they work, for they know where the pots of Fairy Gold are hidden.

So, evening after evening, the boy watched the hedges hoping to catch a glimpse of a little cobbler, and to hear the click-clack of his tiny hammer. At last, one evening, just as the sun was settling, the boy saw a little Leprechaun sitting under a dock-leaf, and working away hard on a small boot. He was dressed in green and wore a red cap on his head. The boy jumped down from his cart, and catching the Leprechaun by the neck, cried merrily:-

“Ho! Ho! ! My fine little man, you can’t get away until you tell me where the Fairy Gold is hidden!” “Easy now I,” said the little man, laughing. “Don’t hurt me, and I’ll tell you all about it. I could harm you, if I wished, for I have the power; but I like you, and you are an industrious lad. So carry me to yonder fort, and I’ll show you the gold.” Carrying the Leprechaun carefully, the boy took a few steps, and found himself close to the ruins of an old fort. A door opened in a stone wall, and he walked

“Now look around,” said the Leprechaun. Then the boy saw that the whole ground was covered with gold pieces, while pots full of gold and silver money stood about in such plenty that it seemed as if all the riches of the world were there. “Take what you want.” said the Leprechaun, and be quick about it; for if the door shuts you will never leave this place alive.” The boy hurried, and gathered his arms full of gold and silver, and hastening out of the door, flung all into the cart. Then he brought out some of the pots; but when he was on his way back for more, the door shut with a clap like thunder, and night fell, and all was dark. The boy saw no more of the Leprechaun; and as he could not even thank him, he thought that it was best to drive home at once and hide his treasure.

When he reached his hut, he counted all the bright yellow pieces and shining silver ones and found that he was as rich as a king And because he was wise, he told no one about his IS adventure but the next day drove to town and put all his money in the bank. After that he ordered a fine house, and laid out a spacious garden, and had servants, and carriages, and many books. Then he married the daughter of a magistrate, and became great and powerful. His memory is still held in reverence by his townspeople. His descendants are living rich and happy; and no matter how much they give to the poor, their wealth always increases.

Only we were lucky enough to find out his story to tell it here!