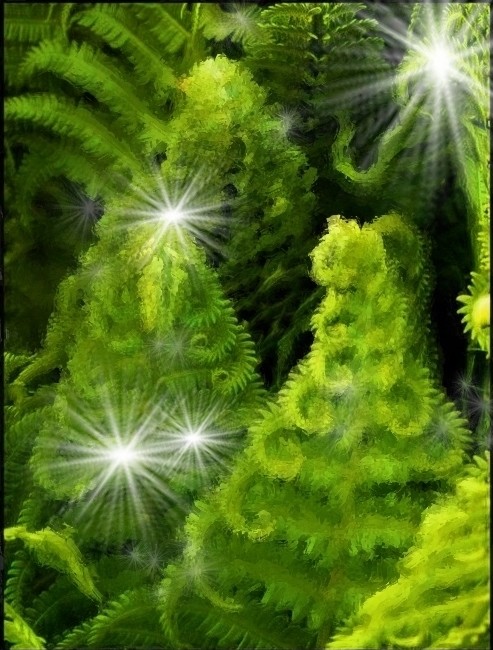 Not many years since, there lived in Cornwall a pretty young girl named Cherry. As she and her mother were poor, Cherry determined to go out to service. So one morning early, she took her little bundle of clothes, and started out to find a place with some respectable family. She walked until she came to four cross-roads, and not knowing which to follow, she sat down on a boulder to think. The spot where she sat was covered with beautiful ferns that curled their delicate fronds over the boulder. And while she was lost in thought, she unconsciously picked a few fronds and crushed them in her hand. Immediately she beard a strange voice at her elbow say:-

“My pretty young woman, what are you looking for?” She glanced up, and saw standing near her a handsome young man, who was holding a bunch of the ferns. “I am looking for a place, sir,” said she. “And what kind of a place do you wish?” asked he, with a sweet and winning smile. I am not particular,” answered she. “I can make myself generally useful.” “Indeed I” said the stranger. “And do think you could look after one little boy?” “That I’d love to do!” said she, smiling. “Then,” replied he, “I wish to hire you for a year and a day. My home is not far from here. Will you go with me, Cherry, and see it?” Cherry stared in astonishment to hear him speak her name; and he added: – “Oh! I see you thought that I did not know you! I watched you one day while you were dressing your hair beside one of my ponds; and I saw you pluck some of my sweetest-scented violets to put in those lovely tresses!  But will you go with me, Cherry?”  “For a year and a day?” asked she. “You need not be alarmed,” said he very kindly. “Just kiss the fern leaf that is in your hand, and say: – ‘For a year and a day I promise to stay !”

“Is that all!” said Cherry. So she kissed the fern leaf, and said the words as he told her to. Instantly the young man passed the bunch of ferns that he held over both her eyes. The ground in front of her seemed to open; and, though she did not feel herself move from the boulder where she sat, yet she knew that she was going down rapidly into the earth. Here we are, Cherry,” said the young man. “Is there a tear of sorrow under your eyelid? If so, let me wipe it away, for no human tear can enter our dwelling.” And as he spoke he brushed Cherry’s eyes with the fern leaves. And, lo! before her was such a country as she had never dreamed of!

Hills and valleys were covered with flowers strangely brilliant, so that the whole country appeared to be sown with gems that glittered in a light as clear as that of the Summer sun, yet as mild as moonshine. There were glimmering rivers, and singing waterfalls, and sparkling fountains while everywhere beautiful little ladies and gentlemen, dressed in green and gold, were walking, or sitting on banks of flowers. Oh, it was a wonderful world! “Here we are at home, said the young man – and strangely enough he was changed! He had become the handsomest little man Cherry had seen, and he wore a green silk coat covered with spangles of gold. He led her into a noble mansion, the furniture which was of ivory and pearl, inlaid with gold\ silver and studded with emeralds. After passing through many rooms, they came to one whose walls were hung with lace as fine as the ‘finest’ cobwebs, and most beautifully twined with flowers. In the middle of the room was a cradle of wrought sea-shell, reflecting so many colours that Cherry could scarcely bear to look at it. The little man led her to this, and in it was lying asleep a little boy so beautiful that she ravished the sight.

“This is your charge,” said the little man. ” I am King of this country, and I wish my son to know something of human nature. You have nothing to do but to wash and dress the boy when he wakes, to take him walking in the garden, to tell him stories, and to put him to sleep when he is weary.” Cherry was delighted beyond words, for at first sight she loved the darling little boy. And when he woke, he seemed to love her just as dearly. She was very happy, and cared tenderly for him; and the time passed away with astonishing rapidity. In fact it seemed scarcely a week later, when she opened her eyes and found everything about her changed. Indeed, there she was lying in her own bed in her mother’s cottage! She heard her mother calling her name with joy; and the neighbours came crowding around her bed. It was just one year and a day from the time when she had sat on the boulder, and had met the fine young man. She told her adventures to all, but they would not believe her. They shook their heads and went away, saying: “Poor Cherry is certainly mad!”

From that day on she was never happy but sat pining and dreaming of the hour when she had picked the magical ferns. And though she often went back to the boulder, she never again saw the young man, nor found the way to Fairyland.