Now Coyote was always hungry, and as he was a coward, he used to sneak about the fields and timber searching for something to eat. One day, as he was walking by the side of a brook, he heard something in a Persimmon Tree. He looked up, and there was Opossum eating Persimmons.

Coyote begged him to throw down some of the fruit, but Opossum only laughed and ate more Persimmons. He picked Persimmons, ate them with grunts, and then threw down the seeds at Coyote. This he kept on doing. By 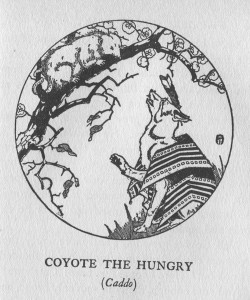 and by Coyote grew angry, but Opossum only laughed the more. He crawled out on a branch and dropped down as though he were going to fall into Coyote’s mouth. And just when Coyote made a snap at him with his teeth, Opossum, instead of falling, wrapped his tail around the branch and drew himself up. This he did again and again. Well, Coyote grew more and more angry, then Opossum climbed out on a dry limb, and shouted: “Look out! Here I come! This time catch me! “And sure enough, the limb suddenly broke, and down tumbled Opossum to the ground. Then Coyote gave him a hard beating, and, leaving him to die, walked away. But Opossum was only fooling, for he was not hurt at all. As soon as Coyote had gone a little distance, up jumped Opossum and climbed into the Persimmon Tree. Coyote turned around to see if Opossum was dead, and there he sat in the tree eating Persimmons, and throwing down the seeds, and laughing.

Well, as Coyote was very hungry, he went on farther looking for something to eat. By and by he heard a noise as though a lot of people were having fun. He went toward the noise and saw a number of young Turkeys playing on a hillside. They were climbing into a bag, and rolling each other downhill. Coyote thought to himself, “Now is my chance to have a good dinner!” So he begged the Turkey’s to let him get into the bag and roll downhill too. As the birds were good-natured, they put him in the bag, and rolled him down two or three times. Then Coyote told them that if they would all get in at once, he would roll them down the hill. So everyone crawled in, and Coyote, quick as a wink tied the mouth of the bag tight, so they could not get out. Then he slung the bag on his back, and went home.

His four Coyote sons saw him coming, and to meet him. “You see this bag?” said he. “It is full of Turkeys, young and tender. Build me a hot fire, and we will have a feast.” They built a fire, but there was not enough wood, so Coyote had to go to the timber to fetch some. Before he went, he said, ” Be sure not to open the bag while I am gone.” Well, the youngest son was very curious, and as soon as Coyote was out of sight, the youngster thought he would like to see what the Turkeys were doing. So he untied the string, and out jumped the Turkeys one and all, and flew gobbling away. When Coyote came back with the wood, he found all the Turkeys gone, and though he beat his youngest son, they had no Turkey dinner that day.

On another morning, Coyote set out for the timber to get some food. He soon saw a wild Turkey sitting on a tree. Now the Turkey was fat, and Coyote licked his chops and said to himself, “I must have that fine bird for dinner.” And as Coyote was a great liar, as well as a coward, he spoke to the Turkey, and said: “If you do not come down from that tree I will climb up and kill you. But if you will fly over the prairie I cannot hurt you there.” The Turkey believed him, and flew toward the prairie, and Coyote ran after him. The Turkey flew high at first, but by and by he began to get tired, and there was no tree to light on. So he flew lower and lower, until he reached the ground, and then Coyote pounced upon him, and ate him.

Now, while Coyote was licking the Turkey’s bones, he looked back to see if anybody was watching, and he thought he saw a man standing just behind him with a big stick ready to strike him. Coyote was terribly frightened, and away he ran as fast as he could go, every now and then turning around to see if the man was following.

And each time he looked, he thought he saw the man close behind, ready to strike. So Coyote ran faster and faster, thinking he must die; until at last his strength gave out. Then he thought he would fool the man, and he began to dodge from left to right, and right to left, until he was so tired that he could not run any more. So he rolled on the grass and turned over on his back, begging hard not to be killed. After that he rolled over on his face, and as he did so he heard something crack in his head. He thought it was one of his teeth. But, no indeed, it was not a tooth I It was a long Turkey feather that had stuck between two of his upper teeth, and stood up behind his left eye. And when Coyote saw this, he knew that he had been fooled ; for there had been no man behind him at all. He had been trying to run away from a Turkey feather!

Ever since that day, Coyote has been afraid, and his eyes are wild; and when he runs he always looks back to see if anybody is following.