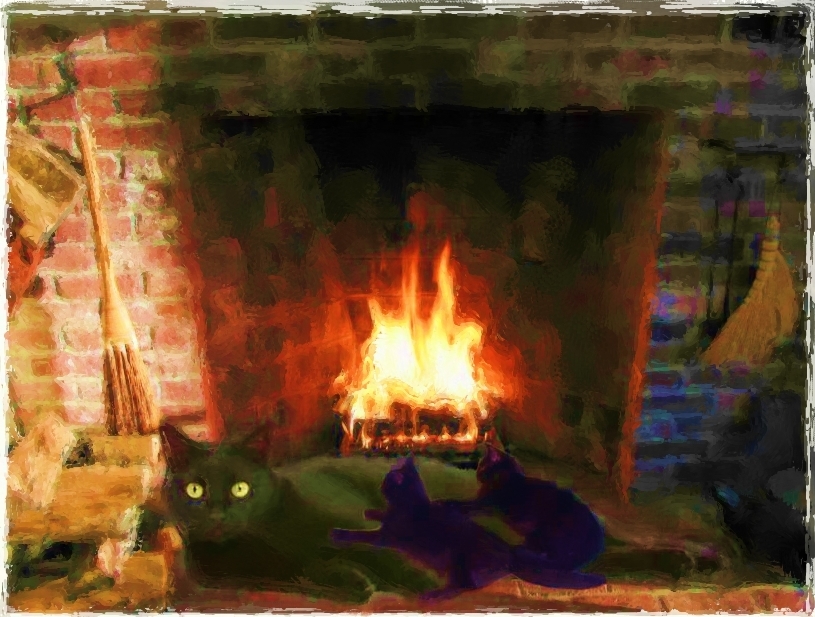 JUDY AND THE FAIRY CAT

LATE one Hallowe’en an old woman was sitting up spinning. There came a soft knock at the door. “Who’s there?” asked she. There was no answer, but another knock.

“Who’s there?” she asked a second time. Still no answer, but a third knock. At that the old woman got up in anger. “Who’s there?” she cried. A small voice, like a child’s, sobbed: “Ah, Judy dear, let me in! I am so cold and hungry! Open the door, Judy dear, and let me sit by the fire and dry myself! Judy dear, let me in! Oh let- me – in!” Judy, thinking that it must be a small child who had lost its way, ran to the door, and opened it. In walked a large Black Cat waving her tail, and two black kittens followed her. They walked deliberately across the floor, and sat down before the fire, and began to warm themselves and lick their fur, purring all the time. Judy never said a word, but closed the door, and went back to her spinning.

This is the Fairies’ holiday, and they wish to hold a counsel in your kitchen, and eat their supper here. They are very angry because you are still up, and they cannot come in. Indeed, Judy, they are determined to kill you. Only for myself and my two daughters, you would now be dead. So take my advice and do not interfere with the Fairies’ Hallowe’en. But give me some milk, for I must be off.”

Well, Judy got up in a great fright and ran as fast as she could, and brought three saucers full of milk, and set them on the floor before the cats. They lapped up all the milk, then the Black Cat called her daughters and stood up. “Thank you, Judy dear,” she said. “You have been very civil to me, and I ‘II not forget. Good night! Good night!” And with that she and her kittens whisked up the chimney, and were gone. hen Judy saw something shining on the hearth. She picked it up; it was a piece of silver money, more than she could earn in a month. She put out the light, and went to bed; and never again did she sit up late on Hallowe’en and interfere with Fairy hours.